Blocked drain in Henley-On-Thames? Get it unblocked FAST!

We're first for any Henley-On-Thames business drainage emergency. Businesses can rely on us for a practical and great value for money drainage services. Our highly skilled Henley-On-Thames drainage technicians use the latest equipment, & we manage efficient delivery of the very best service and prices for all local businesses.

Hello! Welcome to our site, if you have a question don’t be shy and either call or email us, we are always happy to answer your questions.

For the very best value drain service, in Henley-On-Thames RG9 and Oxfordshire .When drains are the only thing you do and as our reviews show you get very good at it!

As the ‘absolute’ Henley-On-Thames drain specialist we focus on doing it right and doing it fast.  Our fixed prices for householders in RG9 is one of the very best offers around the whole of Oxfordshire. No paying by the minute (that sucks) just the job done at a set price.  Just point us to the blocked manhole chamber for supreme service and unsurpassed no quibble fixed prices for Henley-On-Thames householders.

"Excellent service, we were very impressed by the engineer who visited us and would use this company again if required in the future"

Our Drain Repair Service for Henley-On-Thames and around Oxfordshire

When it comes to repairing and resolving drainage issues in Henley-On-Thames we are the experts.

Utilising all cost effective repair technologies, including traditional excavations, slip lining, ‘no-dig’ pipe busting, and we will do a great job at the right price.

We are a team of local Henley-On-Thames experts, we deliver fully detailed and comprehensive CCTV surveys. We will find the cause of the problem and the extent of any damage. We provide reports, assessments and quotations for great value remedial actions.

CCTV is used to visually evaluate the integrity of your Henley-On-Thames pipework for damage caused by the likes of tree roots, pipes blocked by debris and scale, joint displacement, fracturing and collapsed drains in Henley-On-Thames and around Oxfordshire

A CCTV drain survey is ideal for Henley-On-Thames home buyers as we can provide a full ‘Pre-Purchase’ drain survey detailing condition of the drainage system at your new property.

Unblocking your Henley-On-Thames drains at home or work

We carry the appropriate tools for the job and our Henley-On-Thames unblocking charges include the complete range of drain clearing services with High Pressure Jetting as standard.

It is a great value for your money service and you can be sure that we can take care of your home and your family.

Drain locating, plotting and mapping in and around Henley-On-Thames

With the most modern drain tech we can find the routing and depths of Henley-On-Thames drains and sewers by directing a camera with a radio wave emitting sonde into the pipework and track its progress whilst it traverses the pipe. We will supply you with a comprehensive plan of what we've found with depths and direction.

Drains are the only thing we do...

"Very professional and friendly staff both on the telephone and in person on the visit . Work carried out quickly to a high standard"

"Jason was fantastic and super quick! I cannot fault him so big thankyou to him and happy drains for quickly sorting our problem"

"Initial Call response was quick, they arranged for engineer to turn up within 4 hours. The engineer, Gordon, turned up on time, and dealt with a very bad blockage very promptly without mess or fuss. Very professional, would highly recommend. 5 star rating from me"

"Great service all round. The engineer who came was friendly and did a great job. Highly recommended company."

Clear a blockage below a kitchen sink

"Excellent job. My tenant called me to say the kitchen sink was blocked. I called Happy Drains. They were really friendly and encouraging, and agreed to call my tenant immediately to book a date and time to go round. Then the next day I got a call from Happy drains explaining what the problem had been, and what they did to fix it. I'm very happy with the service, and would definitely recommend them."

Investigated bad smell, checked drain, soak away and down pipes

"Lee arrived within half an hour of us calling. He was thorough and explained everything clearly." 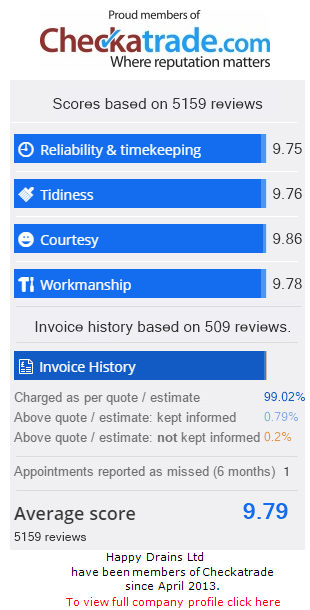 Build-up of fat, grease, or detergent in Henley-On-Thames drains

Clogged or broken pipes in Henley-On-Thames

Failed or broken soakaways in RG9

We use selected local professionals in the Henley-On-Thames RG9 area.

This ensures a fast CCTV drain and sewer inspection & survey in Oxfordshire.

"Did a very thorough job, ensuring that all the bits were properly cleared from the drain, (rather than just get the water flowing and leave). Additionally, he cleared our outer channel which I didn't even know was blocked. Was polite, friendly and explained what he was doing. Would highly recommend."

"The work was completed in a good time with minimal disruption."

"The service I received at a very stressful time, was really friendly and professional. The cost was quoted clearly beforehand. The work was done promptly and advice was given which will (hopefully!) prevent a recurrence. I am a very happy customer."