Blocked drain in Littlehampton? Get it unblocked FAST!

If you have drainage challenges in Littlehampton, we at Happy Drains are ready to help. Great value for money is our top priority, and we aim to provide all customers with exceptional service at the best prices. So whatever the blockage in Littlehampton be it toilet, sink, bath or drain, call us.

We're first for any Littlehampton business drainage emergency. Businesses can rely on us for a practical and great value for money drainage services. Our highly skilled Littlehampton drainage technicians use the latest equipment, & we manage efficient delivery of the very best service and prices for all local businesses.

Our position of trust is hard-earned, and what our customers in Littlehampton say about us is posted online for the world to read. They keep us focused and drives us to offer the best services in Littlehampton. Hopefully, any reviews about Happy Drains' great service will help you make the right decision.

To assure you of our fantastic Littlehampton blocked drain and repair services, just take a look at the fantastic reviews we're constantly getting...

A steady stream of satisfied customers...

A COMPLETE SURVEY OF ALL DRAINS AND PIPES.

"Jason was extremely polite and professional. He did a great job on time and sent back the report including CCTV pictures. We would surely recommend HAPPY DRAINS LTD. To our family and friends. Thank you for A NICE JOB DONE!!"

"Turned up quick and got the job done. Good communication from the office and engineer. No complaints!"

We use CCTV for Littlehampton drain diagnosis

Using the latest state-of-the-art CCTV equipment we will precisely locate the cause of the problem with ease.

Our CCTV drain camera removes the guess work in locating and pinpointing the problem. We will then give a full and comprehensive written report detailing the problem and more importantly the solution. This will be fully priced and give you all the information needed to make your decision you have to consider easy.

We undertake Littlehampton drain renovation and repair works using simple cost-effective methods to ensure any structural problem is dealt with effectively, with minimum cost and inconvenience.

Using the best and most cost effective methods in Littlehampton from traditional excavation to ‘no-dig’ repairs including patch repairs.  These are fast and cost efficient method of rehabilitating damaged Littlehampton drains and pipework and is a favourite to deliver the best priced option with the minimum of fuss amongst the complete range of no dig technology we offer Littlehampton homes and businesses.

If you have a blockage, we can sort it!

Common reasons for blockages in Littlehampton drains can be a result of tree roots or a build-up of detritus. Whatever is causing the obstruction and restricting the flow, we will clear it, quickly and efficiently at a great value price. We use rodding, steel cables with rotating cutters and high pressure jetting all included as standard.

If you have a blockage, we can sort it!

"Excellent service, very friendly, knew exactly what to do, job was done within hour and half of me phoning company"

"Impeccable service. From first phone call with Will to Tony arriving onsite - could not have asked for more. Brilliant service all round and extremely good value for money and guidance. If you have a drainage issue, look no further - I'd use Happy Drains every time."

"The company phoned me 3 mins after my enquiry by email. Tony came and did the job so efficiently without any fuss. It was an unpleasant task too. He was friendly and courteous throughout and I would highly recommend them."

"Very pleased with service. Both the office and operative kept me informed of the arrival time which was within a few hours of my call. Blockage was removed, the area was left clean and tidy. All good. Thanks to the pleasant and helpful operative."

To clear blockage and clean up.

"Would recommend Happy Drains without hesitation. Turned up at the appointed time, did the job at the very reasonable pre-agreed price, and that was that. You hear about rip-off pricing with drain clearance companies, but not with Happy Drains I'm pleased to say."

"Very, very happy customer here. Wasn't expecting much as I knew there was an old soakaway and had been warned of the chances of success but Richard from Welwyn jetted the silt and mud out to restore the flow. Now working 100% in both drains. Extremely satisfied customer" 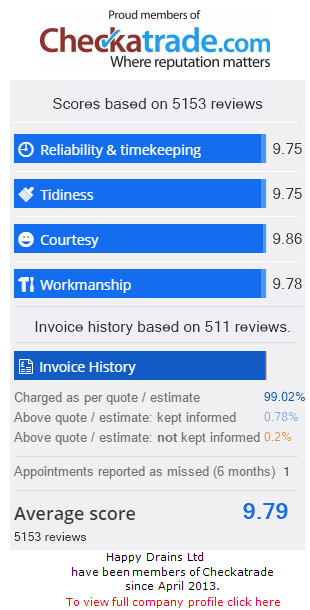 In or near Littlehampton, BN16, West Sussex, the following drainage problems could benefit from a Littlehampton CCTV drain survey...

Clogged or broken pipes in Littlehampton

Build-up of fat, grease, or detergent in Littlehampton drains

Failed or broken soakaways in BN16

We use selected local professionals in the Littlehampton BN16 area.

This ensures a fast CCTV drain and sewer inspection & survey in West Sussex.

"Wayne arrived in great time and sorted out a five day problem (long ago flushed wipes building up) and dealt with everything in under an hour with clear explanations and good humour. EXCELLENT service, COULD NOT RECOMMEND THEM MORE."

"Within a couple of hours calling Happy Drains, Tony had arrived and within a short space of time all sorted. Brilliant job from start to finish - would thoroughly recommend. Thank you"

"We were very happy with the service provided by Happy Drains. The engineer rang ahead to give an arrival time and worked hard to clear the blockage despite limited access to the pipework."