Blocked drain in Wednesbury? Get it unblocked FAST!

Available 24/7 in Wednesbury, Happy Drains can deal with any blockage issues that affect your home. We recognise that a blocked WC or drain can have the potential to be an expensive inconvenience. So don't worry, in Wednesbury we deliver fantastic value for money drainage services.

As the #1 Wednesbury drainage service provider, we'll quickly unblock drains, toilets and sinks. With business relying on delivering good old honest value for money services. Our skilled Wednesbury drainage technicians use the latest equipment to provide all local companies with the very best service and prices.

Our Wednesbury customers tell us what they think, that pushes us to do better. We let the reviews do the talking with thousands telling us how we do. We listen, and we deliver. A reputation based on trust is what we have, and intend to keep in Wednesbury, and happy customers are our priority.

In Wednesbury we love to clear Blocked Drains.

For the best value drain clearance service in Wednesbury and West Midlands, as well as the surrounding WS10 postcode area, Happy Drains are here to help!

It’s what we love to do in Wednesbury, West Midlands and WS10. We always do it right and we will repair it first time. Happy Drains, the right place for unparalleled service and unsurpassed prices in Wednesbury, and all with fixed rates for householders!

"Highly recommend A**** This is the second time we've used Happy Drains, the first time was a more complicated problem, due to drain surrounds crumbling, they unblocked the drain so it could be used then returned the following day once we had reviewed the camera footage and the diagnosis. So today was the third visit. Yet again they were prompt and friendly. It was also really nice that it was the same team that had come here about nine months ago."

"Gordon turned up on time Monday morning, got the blockage removed quickly and efficiently, took care and attention, gave us great information to help us keep the problem from happening again. Would use again in a heartbeat."

"There within a few hours of calling. Jetted out the drain. Cleared up all the mess and very friendly with it. Fixed price and all done within half an hour. Definitely recommend"

Alex arrived within an hour of my call, great job done and all clear. What else do you need?

"Very happy with the work, Alex called before arriving. Fast and efficient work, all fixed. Thank you!"

If it’s blocked drains, blocked lavatories, or blocked sinks in Wednesbury, our engineers carry state-of-the-art equipment to identify and unblock any drain. Most problems in Wednesbury, West Midlands are dealt with competently and effectively by our trained engineers - we'll always try to solve the problem, there and then, on the spot, in just one visit.

Happy Drains are the experts for repairing drains in Wednesbury, WS10. Utilising all the very best, and cost effective repair technologies, including slip lining and ‘no-dig’. As well as pipe busting and traditional excavations, we will do a great job in and throughout West Midlands for the best possible price.

Happy Drains are a team of local experts in Wednesbury, West Midlands and WS10. We deliver fully detailed and all-inclusive CCTV drainage surveys. We will find the cause of the blockage and the extent of any subsequent damage. We can then provide methodical tech reports, assessments and quotations for the best value remedial actions in Wednesbury.

We are fully trained to deal with all types of West Midlands drainage systems and the associated issues, you can ensure that we will take care of you and your home! For a full range of drainage services in Wednesbury, West Midlands and WS10, give us a call. We include high pressure water jetting in our unblocking prices, which means you get great value for your money.

We have created a specially designed CCTV drain survey which is ideal for home buyers in Wednesbury, West Midlands and WS10. It means we can supply a full insight into the ‘Pre-Purchase’ condition of the drainage system at your new property, designed to meet the needs and requirements of home buyer’s.

Inspected cause of basement flooding due to rainwater overflow.

"Incredibly prompt service. Was lucky to have Tony turn up with his 37 years of experiences. Superbly efficient, very polite and found solutions to a difficult problem in a very old property in Lewes. Well done Happy Drains team."

"Really happy with this company and their service. They answered same day, booked me few days later, the job was done very proffesional and good. Very nice and kind team of people as well, would definitely recommend to anyone !!!!"

"Excellent service from start (the call to the service dept) to finish (the happy drain!). Fast, efficient and polite, were also able to come same day which was really great - resolved blocked drain issue quickly. Would really recommend this company."

"Excellent service - arrived at the time agreed, and called beforehand to confirm. Work was carried out quickly and professionally, and the problem is now fixed. Also provided recommendations to prevent reoccurrence."

"I filled out the web contact form at midnight on Sunday and received an email by 7am confirming a booking for later on Monday. The technician, Gordon, arrived on time and despite some challenges managed to clear the blockage. Gordon's professionalism and courtesy were top drawer and a credit to your company."

"I don't normally write reviews but the service and quality of work I received was to such a standard that I wanted to make the effort. When I phoned I spoke to someone who was very helpful, promised to speak to an engineer and call me back within 20 minutes, which they did. I was told they could come out that same day, which was great as a blocked pipe is so much hassle. Was called prior to engineer arriving with a time, which they arrived within and they did an excellent job, very polite, professional and friendly. Thank you for sorting out my issues, I will be recommending you to everyone!"

"Gordon had unblocked drain within 5 minutes. I would not hesitate to use Happy drains again. There response was quick and Gordon was friendly helpful fantastic service thank you Happy Drains"

"Efficient service, cleaned up afterwards and checked that the drain was clear." 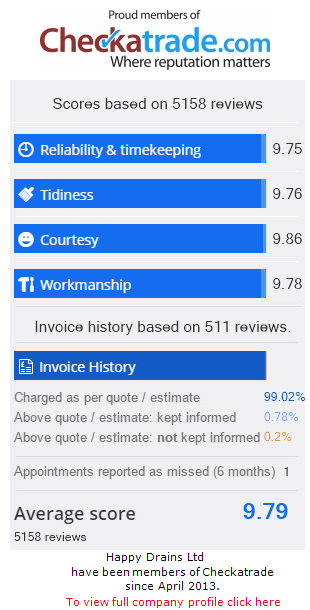 In or near Wednesbury, WS10, West Midlands, the following drainage problems could benefit from a Wednesbury CCTV drain survey...

Clogged or broken pipes in Wednesbury

Build-up of fat, grease, or detergent in Wednesbury drains

Failed or broken soakaways in WS10

We use selected local professionals in the Wednesbury WS10 area.

This ensures a fast CCTV drain and sewer inspection & survey in West Midlands.

"Happy Drains were very quick to call me back after an online enquiry and within 24 hours they were at my property. Tommy took the time to investigate my sewer system and even came to the neighbours with me to ask to check their drains. He clearly explained the problem, flushed the system and was done in an hour. He said before he started a second hour he would ask me first if I wanted to continue. Would use again"

"Tommy and Gordon were great, really lovely and cleared the blockage. Would highly recommend."

"Tommy and Gordon did a great job in finding the first, and then the second blockage. Very happy to recommend them as they didn't give up and tried everything even though it turned out to be rather tricky."